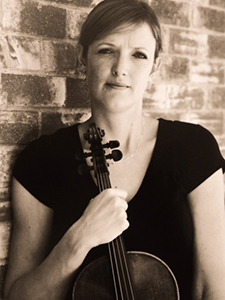 Principal Viola on the Dallas Opera Orchestra and teacher of strings to young people, Liesl-Ann deVilliers knew she wanted music to be her career the moment that a string orchestra visited her grade school in South Africa so many years ago.

Born in New York City, Liesl lived most of her early years in South Africa. One of six children, all of whom played an instrument when they were young, Liesl would be the only one to become a professional musician and musical teacher. She was first introduced to the piano at about age 5. When she was 11 she saw and heard the orchestra visiting her school, her career path was set in her mind.

In South Africa’s schools, she received a degree in Piano and acquired a post-graduate degree in Piano Performance. While studying piano in South Africa, she studied the viola as a second instrument, and soon gaining a position in the youth orchestra, with which she would also perform in Europe, especially in Italy and Scotland and a large music festival in Moscow. Liesl, whose mother was a Montessori teacher, also soon began teaching music in South Africa in what is known as a Farm School, and later teaching the same students in the Symphony outreach program.

After immigrating back to the U.S. in 1998, Liesl began studying viola under Susan Dubois, acquiring a Master’s Degree in Viola Performance from the University of North Texas. Since then, she has attended the National Repertory Orchestra in Colorado where she was principal viola and was featured as a soloist, and was selected as a Substitute player for the New World Symphony (Florida). In Texas, where she has lived for the past 14 years, she has played in numerous symphonies, including the Fort Worth Symphony, Dallas Symphony, and Richardson Symphony. In 2009, she got her first orchestral job with the Dallas Opera Orchestra, with which she has advanced to Principal Viola.

While she was in college, Liesl also continued to teach children music at all levels. In 2003, she joined the faculty of the Suzuki Music Institute of Dallas, and later became a violin/ viola specialist teacher at the Hockaday School, a private school for girls.

Today, teaching out of her home and using the Suzuki Method, Liesl teaches string instruments to all children, ages 5 to 18 years old. She has a true gift for connecting with her students, who love being taught by her.

Liesl treats all students equally, whether their abilities are average or above average. She does not teach only the most accomplished students. She welcomes any child who has an interest in learning, even if they may never reach a high level of competency. “I’m about helping them to reach their personal potential—whatever level they can acquire is what I want for them,” she says.

Liesl is certified by the Suzuki Association of the Americas (SAA) in Books 1-6 for violin and Books 1-4 for viola.

Liesl-Ann deVilliers has a son. He learned cello first and now plays the trombone.